I’ve had a fairly exhausting week, but I managed to accomplish a lot!

On Monday, I went to the University of Tokyo’s hospital for my monthly check up. As usual, the department ran several hours late, and I was forced to wait it out in a room full of roughly one hundred people with various unknown illnesses. As a person with (medically induced) immunodeficiency, I always find the prospect of waiting in a room full of potentially sick people daunting: the Japanese public healthcare system certainly doesn’t help allay my fears. Thankfully, I was eventually seen by my cardiologist and given a clean bill of health alongside a six-week supply of medication. By the end of the eight hour ordeal (from 8AM until 4PM), however, I’d lost my capacity to focus on work, so I decided to call it a day.

On Tuesday, I began making inquiries about the possibility of extending my visa. My current “Cultural Activities” visa is due to expire at the end of August, and I wanted to make sure that I have plenty of lead time to extend it in case anything goes wrong. I reached out to Ritsumeikan University and the University of Tokyo, eventually learning that the latter has an internal consulting service. After an exchange of e-mails back and forth with that service, I received a list of necessary paperwork and forms to fill out in order to process my extension request. I began to fill out those forms, which I showed to a representative from the consulting firm on Thursday. For now, it looks like everything is in the clear (although I cannot apply for my extension until mid-May). Still, I’d rather be safe than sorry, and I’m glad that I started the process sooner rather than later.

Also on Tuesday, I had the chance to Skype with Bryan Lowe of Vanderbilt University (soon to be Princeton University!) Bryan and I have met on a couple of occasions, and I find his work on purity and scribes in Nara Japan to be incredibly useful for my own work on religion and disability. Bryan and I took the opportunity to discuss my project on the relationship between defilement and access in medieval Japan, and he was even so kind as to send me a list of sources to check out. Bryan, if you’re reading this, thanks so much!

On Wednesday, a technician came out from my ventilator company to inspect the borrowed unit and ensure that my current settings are adequate (they are). After he left, I dove straight in to Tateiwa Shinya’s new book on patient movements in postwar Japan. As always, I found Tateiwa’s work really insightful, and his extensive bibliography gave me some ideas for the second chapter of my dissertation. I had to shelve those ideas for the time being, however, as I had a meeting with my scholarship administrators at the Japan Foundation. The meeting went swimmingly: I had a chance to update my handlers (who are really more my friends) about my current research and its connection to my activism and daily life. Although I found a soft ending point for our conversation, it seemed as if everyone wanted it to continue. Indeed, I suspect that I’ll have a chance to pick it up again at some point in the near future in the form of a public-facing lecture at the Japan Foundation headquarters.

On Thursday, I dropped in at the University of Tokyo’s Barrier-Free division to meet with the secretary for my department. We discussed many things: my living situation, visa status, career prospects, and, of course, research developments. What I thought would be a short ten minute conversation turned into a two hour dialogue. I certainly wasn’t complaining, however: if there’s one thing I like, it’s talking about accessibility! In any case, I had to cut our talk short to attend a prep session for the U.S.-Japan Collaboration on Disability and Self-Advocacy in Higher Education (a workshop which is scheduled to take place this fall in Tokyo). The meeting was attended by many familiar faces, including but not limited to Heike Boeltzig, Hiroya Banzono, Shin’ichiro Kumagaya. While I can’t go into too much detail about the contents of the meeting, it’s safe to say that we discussed a great many things related to disability advocacy and representation.

On Friday, I returned to my historical dissertation research by turning to memoirs of sanatoria directors and administrators in Japan which recount their experiences during the 1940s and 1950s. Those memoirs were particularly interesting when viewed in light of the Ministry of Health’s A History of National Sanatoria, which provided a structural  overview of the system in which their principle actors lived and worked. Without going into too much detail, the literature I was reading illustrated how the experiences of sanatoria administrators, like those of their patients and clients, were not at all uniform. Each administrator had to negotiate a unique set of circumstances, informed as much by practical and economic concerns as moral and civic responsibility.

On Saturday, I woke up early and headed out to Saitama (around a two-hour train ride from my current residence) to attend the final lecture of two giants in the field of Universal Design in Japan: Takahashi Gihei and Kawauchi Yoshihiko. Both professors are due to retire from Toyo University’s Department of Human Environmental Design next month after long and successful careers. I’ve learned a lot from both Takahashi-Sensei and Kawauchi-Sensei during my short stay in Japan, and I’m sure that I’ll continue to learn from them as I work through my dissertation. For now, I wish them nothing but the best and hope that their transition toward (additional) consulting work goes smoothly.

On Sunday, I spent the majority of my day designing a PowerPoint presentation for my upcoming TED talk (to take place in Tokyo on March 17th). As always, the design process took several hours longer than I anticipated because I’m incredibly picky about the images and effects that I use. Nevertheless, I was happy with the end result, and I suspect that it’ll go over well when I give my talk. I suppose I’ll have a chance to find out, as there are several scheduled practice sessions between now and then.

Today, I conducted some research into the formation of Japan’s laws and policies related to the education of children with disabilities in the postwar period: specifically, those related to children with intellectual and psychiatric disabilities. My research was mainly focused on documents produced by the United States Education Mission to Japan and the Committee of Japanese Educators. After working for a while, I ran out to Toyosu to walk around the mall and take a much-needed break. There, I met up with Nathan Hopson, one of my senpai from Penn who currently teaches at Nagoya University. Nathan and I discussed our respective research projects at length as well as the costs and benefits of job-hunting in Japan and the United States. I learned a lot from him, and I appreciated how broad and deep our conversation was. Looking forward to talking more in the future, Nathan!

That’s all I have for now, everyone. This coming week also promises to be a busy one, with daily meetings and dissertation work. As always, thanks for reading and stay tuned!

(I don’t have any great photos from this week, so here is the last slide of my TED talk!) 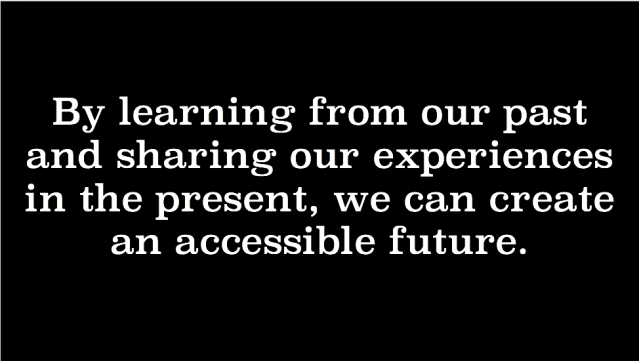