I’ve now entered the second week of my research here in Japan, and what a busy week it’s been!

On Monday, I spent some time working on a forthcoming article about disability and religion in medieval Japan before heading over to the Nippon Foundation’s newly constructed training facility for the Paralympic Games. Upon my arrival, I received a guided tour of the facility from a foundation employee and learned about its history. Apparently, the facility was built because there was no training space available in center Tokyo for disabled athletes who required significant accommodations. As I toured the facility, I conducted an access audit and I must say that I was pleasantly surprised. Although built on a budget, the facility managed to accommodate disabled athletes with a wide range of impairments. While it lacked automatic doors and tactile pavement, it boasted high contrast surfaces, industrial strength fans, wheelchair-accessible parking, and accessible toilets of various configurations. The shower rooms also had nozzles on different sides and the lockers were kept at different heights to maximize accessibility. All in all, I was very impressed, but I wondered how the engineers and architects behind the facility’s construction determined which accommodations were necessary. When I asked my tour guide, he let me know that the Nippon Foundation headquarters was located near several major para-sports organizations and that they coordinated their efforts to ensure that as many users as possible could be accommodated. I certainly applaud their effort, but I wonder if a public facing dialogue might be in order as the space is open to anyone (with a reservation) and will surely continue to be used after the games conclude.

On Tuesday, I had a conference call with some of my partners on the Accessibility Mapping Project (AMP). For those unaware, I have built a mobile app that allows users to report and visualize barriers to access on college and university campuses across the globe. My meeting was primarily concerned with the continued development of the AMP as well as its practical implementation back home at the University of Pennsylvania. After concluding my meeting, I then traveled to STEP EDOGAWA, an independent living center around an hour away from my current residence. While I went to inquire about my continuing troubles finding caregivers, I left with a bunch of new friends and people to interview about the development of disability rights in Japan. After returning home, I spent a few minutes relaxing before catching up with Patrick Galbraith, an old friend/former professor with whom I chatted about everything from research to our favorite anime songs.

On Wednesday, I visited the University of Tokyo’s hospital for a cardiology appointment. As it turns out, heart transplants are still a relatively new and rare procedure in Japan, and the number of specialists able to treat patients are few in number. As I had a transplant seventeen years ago, I had little choice but to seek out one of those specialists for an introduction and routine checkup. During my consultation session, I learned that cardiac biopsies, surgical procedures rarely performed in the US at my stage post-op, are routine in Japan and that I would need to undergo two per year. Also, I would have to submit to routine cancer screenings, which are not carried out in the United States. Both procedures involve a heavy investment of time and money, which someone less privileged than I might not be able to afford. Again, just another example of how measures to make Japan a more accessible place for some persons with disabilities may exclude others.

On Thursday, I spent the morning writing and scouring local newspapers for recent articles about disability in Japan. I continued to develop the fifth chapter of my dissertation, which focuses on the connection between increased accessibility/visibility of persons with disabilities and increased violence before taking a lunch break. I was fortunate enough to meet up with a former employee of the study abroad program that sent me to Sophia University in 2013. We had a great time catching up and talking about my progression, as a scholar and an individual, as well as the way that the program had come to take in many students with disabilities since my departure. As an FYI for those unfamiliar with me, I’ve been many ‘firsts’ when it comes to Japan and accessibility. I was the first exchange student to use a wheelchair at Sophia University and the first Fulbright scholar to use a wheelchair in Japan. As far as I am aware, I am also the first Japan Foundation Fellow to use a wheelchair as my primary mode of transportation, but I’d have to check to be sure. Trailblazing is great, but often challenging work. It’s always fantastic to hear that it pays off, and that others are benefitting from my struggles.

On Friday, I spent most of my morning focusing on my ongoing caregiver conundrum. I called over thirty caregiving companies in nearby wards to see if they would be able to assist me and received nothing but apologies in return. It was only when I decided to reach out to companies within my ward, where I was told it would be a waste of time to look, that I found a glimmer of hope. As it turns out, the city hall had been making calls on my behalf and found four companies that collectively may be able to cover my needs. I’m due to meet with those companies on Tuesday, so keep your fingers crossed!

On Saturday, I began to buckle down for the upcoming typhoon and spend some time researching disability online on the National Diet Library’s digital collections archive. I also walked around Odaiba and got some fresh air before accidentally stumbling into an international development festival. Among the various kebab stands and donation stations was a booth run by the Japan NGO Network on Disabilities (JANNET). I spoke with some of the representatives at the booth, discovering that they knew about my advisors work and that we had many contacts in common. After watching a Japanese Sign Language and Braille Reading demonstration, I snagged a flyer for an event called, “What is an accessible meeting, anyway?” that is due to take place in mid-December before heading home.

And today, I’ve spent some time catching up with many of my friends from the United States while I wait for the typhoon to pass. There’s also an information session for the upcoming TedXFulbright Tokyo conference this evening that I hope to Skype into.

Looking forward to next week, I have some fun things lined up. In addition to the aforementioned meeting about caregivers, I’m due to meet with my high school Japanese teacher for the first time in Japan. I’m also due to give an interview to a USC reporter about the state of education for persons with disabilities in Japan and have my first formal meeting with my academic advisor, Dr. Satoshi Fukushima. I’ll be sure to let you know how everything goes!

As always, thanks so much for reading, and stay tuned! 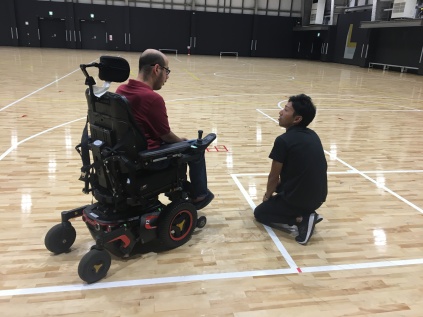 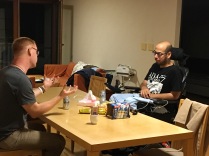 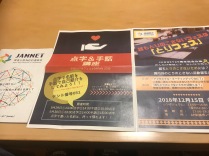 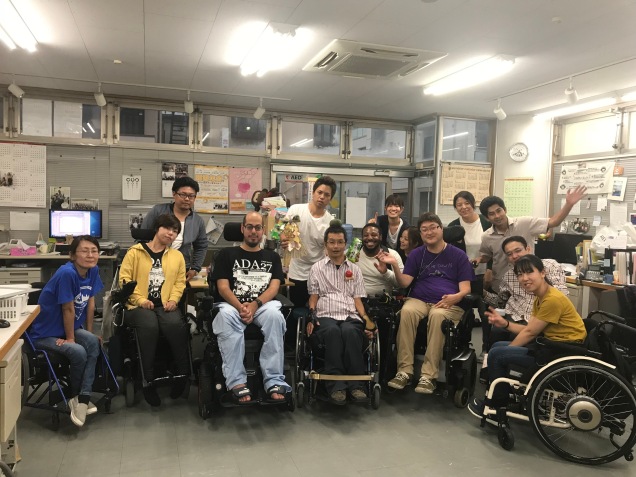